Rise of e-Wallet in Europe 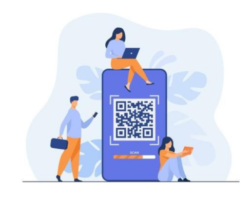 It is no news that e-Wallets are taking over a major chunk of e-commerce payments. According to the reports generated by paymentscardsandmobile.com, e-Wallets are set for strong growth and are ready to eclipse debit cards and become the most popular payment method for online transactions, taking 34% of the payment market. This rapid growth will also help fuel the M-commerce market in Europe which is projected to rise at an annual average of 21% in the next five years, faster than China, the US, and Japan.

Competitive e-Wallet market between the US and Europe

The United States e-Wallet market was valued at US$8,905.709 million in 2019 due to the early adoption of technology in the country. People in the US are relying on the tremendous potential that the payments through e-Wallet hold due to its reliability, one-click payments, and better connectivity. According to the latest survey report by the Electronic Transactions Association, more than 27 percent of small businesses in the U.S. have already reported a rise in contactless payment services including Apple Pay. Retailers such as Burger King and Walmart are also encouraging the cashless and contactless payment trend to curb the further spread of this virus. The United States Digital wallet market has been segmented based on the device and application. By device, the market has been segmented as PCs/laptops and smartphones. By application, The United States digital wallet market has been classified into money transfer, recharge, movie booking, food ordering, and others.
As per the reports generated by MarketResearchFuture, the global E-wallet market is expected to grow at CAGR of 15% and estimated to reach market size of approximately USD 2,100 billion by the end of forecast period 2017-2023.By 2025, the European payments market is expected to hit $1.95trillion value which will prove to be an immense opportunity for big players like Amazon, PayPal, Apple, etc. to invest in digital and mobile payments. As compared to the US, the adoption of e-wallet is still the least in Europe and is expected to grow in the coming years.
The UK is the major consumer of the new technology in Europe as per the reports of Buy Shares followed by Germany, Italy, and France. With the adoption of the Second Payment Services Directive in Europe, the opening up of the payment market to competition from non-banks is what has grown more competition across the payment landscape. The digital wallet world is only expected to boom with the growing years with major giants occupying the majority of digital payment space. NFC and QR codes will also see a sudden rise as a safe and fast payment solution. However, this is projected to change due to its cost-effectiveness for merchants who will now require less infrastructure to process payments, while delivering more convenience for customers with regards to better decision making.

The advantages of e-Wallets over cards

e-Wallets promise high-security features by authorization of every transaction either with a PIN or a password. All of your account information is encrypted and secured. This qualifies e-wallets as the safer mode of payments which is far better than walking with heavy cash and credit cards in your pocket.
Easy to link with other accounts
Making use of an e-wallet gives the flexibility to make payments using different accounts. This not only saves space in your actual wallet but also helps you in providing multiple options while initiating payments.
Better customer experience
By integrating all the benefits on one platform and offering the customers to pay at their convenience makes it easy to convert leads into potential customers.

Contactless payments are known to improve the speed of transactions which makes it easy for users to make purchases in seconds. Thus, making the payments quicker and easier as compared to other modes of payments. 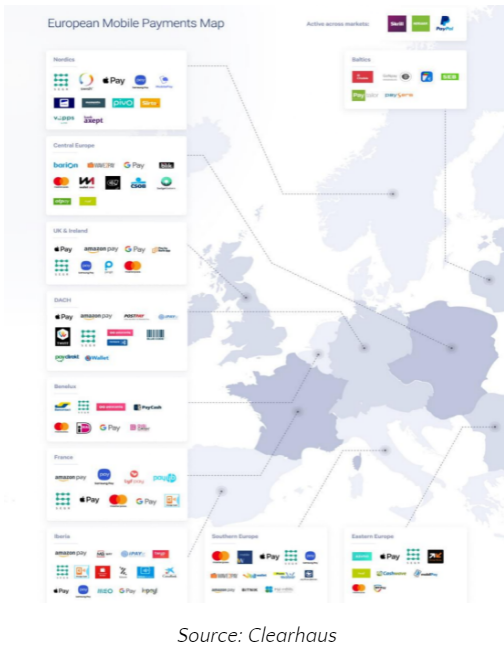 According to the above image, there are 2 types of the market where these payment e-wallets are highly used:

Global
In the Global market these are highly used mobile payment or digital wallets services:

Mobile payment and digital wallet services have come to stay in European pockets. 68% of European shoppers have used a mobile payment and digital wallet service in 2020. Though mobile payment and digital wallet services are relatively new in the payment world they are expected to soon become a European favorite. 84% of Europeans are active users of the internet. As consumer interfaces become more intuitive, even the older generations are more engaged online. 64% shop online, which makes purchasing goods or services one of the main activities on the internet. Laptops and desktops are currently the main devices used in online shopping, but not for long. Europeans are moving their shopping from their PCs to phones and tablets. In 2 years, time, 4 times more Europeans will have bought something online using their mobile device.

The European mobile payment market is expected to grow at a CAGR of 21.88 % during the forecast period of 2018-2026. The growth in the e-commerce sector and the widespread use of mobile payment by the unbanked populace are propelling the growth of the mobile payment market in this region.
The countries analyzed for this region include the UK, Finland, Sweden, Norway, Germany, and the Rest of Europe. The continuous introduction of user-friendly technologies and the entry of big players into the market are two of the most significant aspects that are providing the market with opportunities to expand its growth. While the UK market accounted for the highest revenue share in 2021, it is the Sweden mobile payment market that is anticipated to rise with the highest CAGR. Sweden, with the highest living standard in the world, is a mature economy. The major key driver for the growth of this market is the availability of the internet to the root level. Sweden is a country with the highest app downloads per user. Four out of five purchases in Sweden are paid electronically.

Many customers have trust issues in contrast to the privacy regulations when it comes to e-wallets. As per the survey by Auriemma, it was found that consumers are reluctant to recommend e-wallets to others.

People not familiar with e-wallets can be defrauded easily. Without prior knowledge, the acceptance and initial usage of e-wallet creates fear among consumers. To get rid of this and spread awareness your e-wallet should be EU-GDPR compliant to create trust among users.

Future Predictions of e-Wallets in Europe

The future acceptance of biometric authentication is going to be considered as the widely used verification method to perform transactions using e-Wallet. It also protects users from identity theft and online fraud and enhances customer trust in the solution.
Payments using smart appliances
Smart home appliances functioning on voice commands for their users are becoming popular. Shortly, it is expected that e-Wallets can be linked to smart appliances and allow users to make online purchases, bill payments, and order tickets or food without ever having to tap anywhere on the phone.

Near Field Communication chips and readers make it possible to make a contactless payment if both are in proximity. There is no need for a PIN or biometric authentication and encrypted data transfer that enables transactions at high speed and is expected to be used widely for e-wallet payments.

Cryptocurrency users are among the most sophisticated fintech users. That is one reason why e-wallets with cryptocurrencies are on the rise. It is expected to have over 40 million active cryptocurrency e-wallets as they provide a convenient way into investing and trading.

Evidentially, due to a sudden surge in e-wallets, the payment landscape is varying substantially across the European eCommerce market. The customer demands are changing day by day followed by their behavioral choices which one must be aware of before entering a new market in Europe. Integrating your platform with trending payment methods should be the top-notch parameters that need to be ensured before entering the highly competitive landscape. However, one point is for certain, mobile payments and digital wallets will continue to gain mass adoption in the immediate future, and it’s worth paying attention to developing countries that will likely contribute substantially to the development.