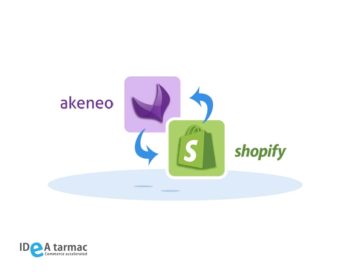 Last week we announced the launch of Shopify data connector on Akeneo Marketplace. Now time to say hello to this beautiful piece of data connector technology.

Ideatarmac’s Shopify connector is a cloud-based Middleware, which enables, facilitates, and manages the data flow between Shopify and Akeneo. Besides its two interfacing layers which is used to integrate Akeneo PIM with Shopify, it contains a core connector unit to convert, process, and edit the exchanged data.

Shopify Akeneo Connector comes with most modern features like low coding, data review before importing, custom imports scheduling, completely automated with options to connect multiple Akeneo instances or multiple Shopify sites. Additionally ,data connector is also ready to connect Shopify or Akeneo to other channels, hence reducing the overhead of new integration for each channel. Depending on the e-commerce retailer’s requirement a custom set of functionalities can also be addressed.

We don’t see any more reason for you to wait. Headless e-commerce is the way forward to stay in competition; be the best to win! Connect one of the best PIM Akeneo to your Shopify store now. See you in Akeneo Marketplace