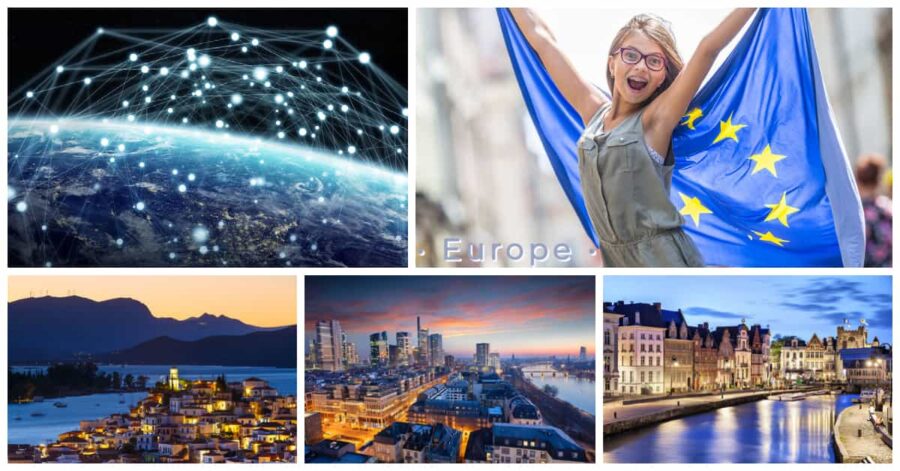 There are many providers on the market, which understandably makes the selection process of it harder. Which shop systems are the most popular? What are the current trends and which platform is the best one for your e-commerce business? Which ShopSystem should you invest in to gain access to a bigger market in your region? In this article, we intend to share with you some of the expected ShopSystem trends in 2022.

The first in this series is the article about Europe. An e-commerce trends prediction for the other main regions of the world will be following suit. 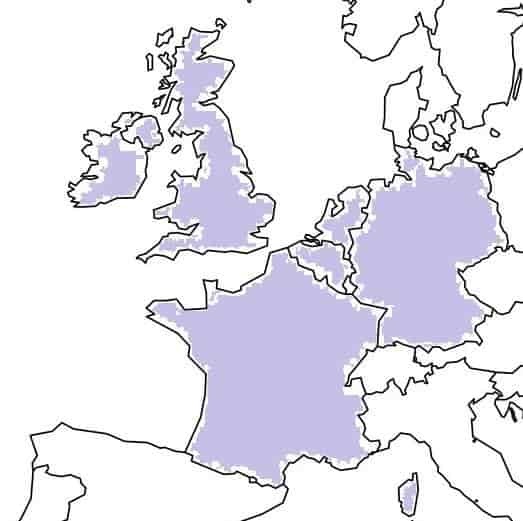 In 2018/2019 systems like Magento, PrestaShop, WooCommerce and Shopify were at the top of the game. That has however since then changed. A few players (like Shopify and WooCommerce) have since then improved to stay on top and some (like Magento and PrestaShop) have dropped in the ranking and have been replaced by newcomers. 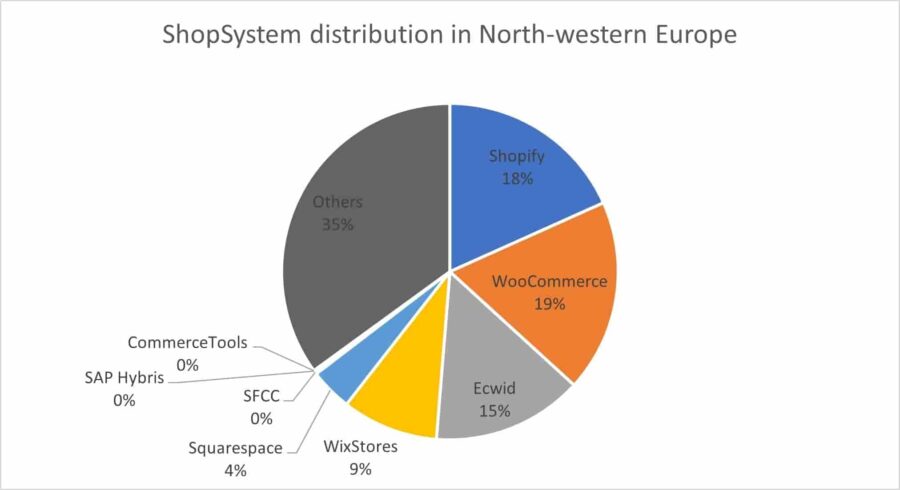 In recent years, we have seen an increase in the usage of shop systems like Wix Stores, Squarespace and Ecwid. That is why we expect for that to continue being the case in this region.

The decrease in usage of Magento seems to result from the lack of competition they are to other Shopsystems. Compared to the likes of Shopify, or WooCommerce, their customization service is much more expensive. That leads into the Community version not being chosen over the other ones. Whereas the Enterprise and Premium Enterprise versions are mostly catered towards enterprise leveled businesses, rather than small or medium ones. However, there are other systems, which are preferred over it like SFCC and Hybris. With technologies like PrestaShop, the platform isn’t as robust as others. As a result, it doesn’t support growth as well as other platforms, which leads into users either deciding on another shop, or switching in between.

These have been replaced by the likes of Wix Stores, Ecwid and Squarespace, which provide similar features like the other platforms do with their own niches. For example, some of Squarespace’s the biggest attractions are their website design and customization. Ecwid’s are the multilingual & multicurrency set up and the ability to access your shop on both computer and mobile. And lastly Wix provides an extremely simple plus straightforward drag-and-drop website builder meaning one can design then customize a full free site without any coding skills.

The North-western European market is a consolidated one. Most of its vendors have an already large amount of products and a significant amount of experience. These countries also have an ever-increasing GDP and a large amount of internet users and shoppers. As a result, this market’s needs are for consolidated platforms as well as niche features to make them stand out from their competitors. Which is where enterprise level shop systems come to play. The biggest players like adidas operate with the help of systems like Salesforce and SAP Hybris. With examples of this price point it is important to note, that while the amount of active users they have does not compare to the previously mentioned ones, the generated revenue is much higher. That said, the trends show that with the start of Covid, despite the general amount of online sales going up, all three enterprise level systems have lost quite a few active users to the premium versions of the above-mentioned ones. This year’s trends may also show a similar pattern for them in this region.

On the other hand, retailers like Audi and Bohoo use headless ecommerce systems like CommerceTools. Headless ecommerce systems separate the backend and frontend functionalities. Which means that they create seamless shopping experiences across all digital touchpoints. CommerceTools supports a modern microservice-based architecture and offers a wide range of integrations and is a highly scalable cloud platform with a flexible commerce API at its core. Headless systems have gained a lot of popularity in the last year. As a result, we think that that trend might also continue going up this year. 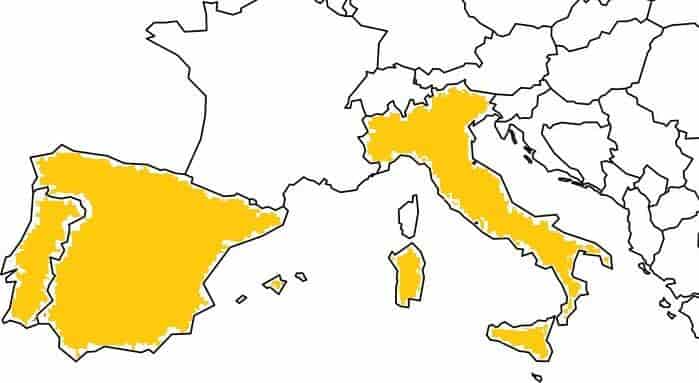 The southern European market is also a consolidated one. However, when compared the two have differences in the amount of internet users and shoppers, with the previously mentioned region having the lead. The southern e-Market is according to the European E-Commerce Report of 2021 not as vividly used. The traditional in store shopping is preferred to the e-shopping one. This region has as a result more room to grow and there are many newer and smaller businesses that profit from the above-mentioned technologies.

The most commonly used shop systems in the southern European e-market are WooCommerce, Ecwid, PrestaShop and Shopify. As said, the e-market in itself is a newer territory, which means that features from the platforms that are more commonly used are a must have to help businesses build up. While PrestaShop is not necessarily the best match for north-western ecommerce, it is a better one for the southern one. A few of the main reasons are its user and budged friendly designs as well as the ease in installation and payment.

For 2022 we predict that the number of e-shoppers will rise and as a result a need for bigger platforms. Systems like Shopify, WooCommerce and Ecwid will continue to grow in the number of active users. PrestaShop is however a different matter, because as previously mentioned, it doesn’t have a lot of room for businesses to grow. We predict that the now “bigger” users of PrestaShop will mostly switch to the likes of Shopify and WooCommerce, but they will also gain more new users. Systems that will most likely increase in numbers are Wix Store and SquareSpace.

South Europe is also a well-liked/well known region for/by the enterprise level systems, as southern countries list between the northwestern ones. A few years ago, these big players invested more in this region, which led into the number of websites they provided for to increase. After the pandemic hit the stop button on normalcy however, the number of clients started dropping. Just like mentioned above, the trends in this region may also show a decrease of active users for the premium ShopSystems in 2022. 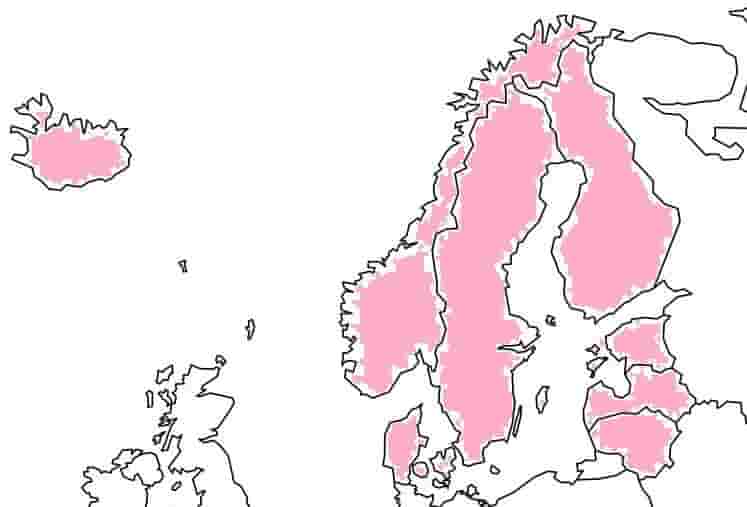 The northern European countries are very high up in the list of e-shoppers, ranging from 90% to 67% in the newer e-markets. That said, while countries like Denmark and Sweden have a more stable e-market, the relatively newer territories like Latvia, Estonia and Iceland have a bit more of a playing room to them. The number of e-shoppers will most likely continue to increase, which opens the game for all the shop systems.

Until the end of 2021, WooCommerce and Shopify dominated the northern European e-market with SquareSpace and OpenCart following closely behind. For 2022 the research data shows that in countries like Denmark and Sweden, Shopify and WooCommerce will continue to dominate the e-markets. Other systems like SquareSpace and Ecwid will however gain more active users, as it is predicted that the number of e-businesses will continue rising. For the rest of the countries, where besides WooCommerce and Shopify, OpenCart also was one of the bigger players, we predict for that due to the ease in use as well as the cost-effective (most of the plugins are free) that will remain similar to 2021. PrestaShop is also one of the most used systems in Lithuania. With the number of e-shoppers and e-retailers, they will also continue gaining active users. However, just like in the southern European market, the “bigger” active users will most likely switch to platforms that can support their growth better than PrestaShop. 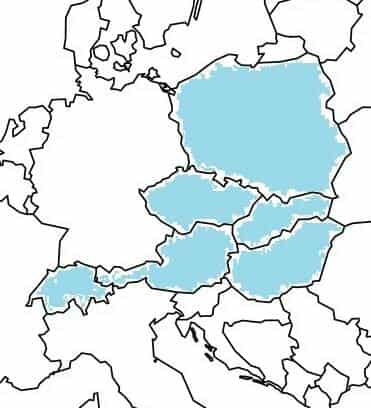 Compared to the other regions, central Europe is more diverse in the sense of ecommerce. The region’s e-shoppers per country ranges from 90% to 68%. In terms of e-shopping there are countries that are more established and some that are newer to it. Just like in all the previous regions, the likelihood of an increase in the number of e-businesses is very high. 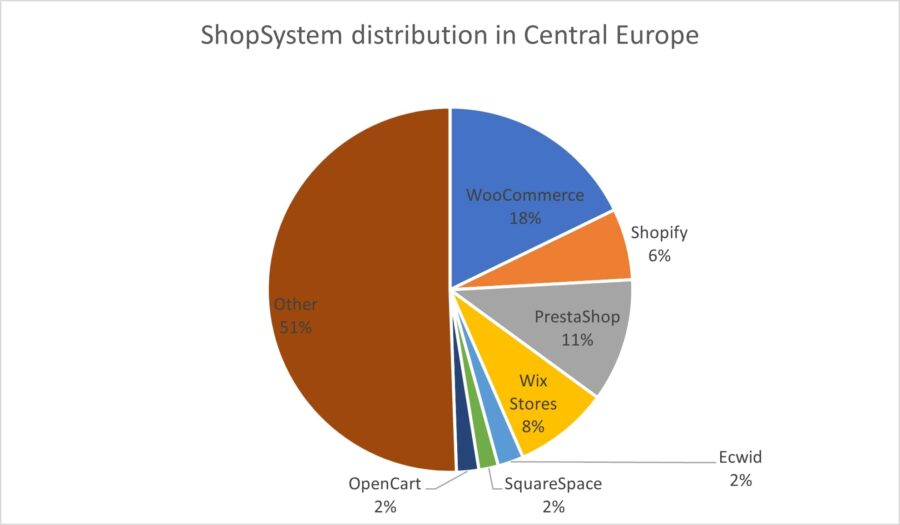 As you can tell from the map, the most repeated names from 2021 are those of PrestaShop and WooCommerce with Shopify and Wix Stores following up. We expect that Shopify to gain more active users. WooCommerce will continue to lead this region. PrestaShop will gain more active users due to its ease of use and will continue following second. Regarding other systems like Wix Stores, SquareSpace or ones that are specific to a country (like IdoSell, Shoptet, Unas, etc.), they will also most likely continue gaining more users – depending on the active users’ business’s needs. 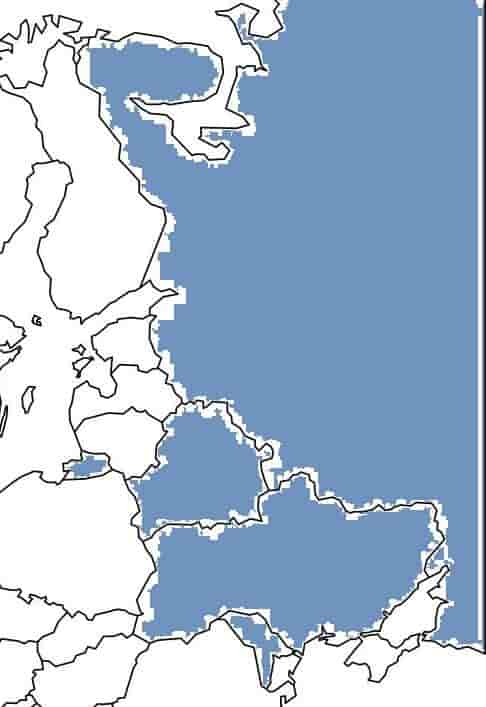 This is a region that doesn’t have a lot of e-shoppers compared to its population and the number of them has barely increased with the start of Covid-19. They range from 45% to 34% of the inhabitants of these countries. As a result of the data from the European report and the data from previous years we don’t predict a lot of change in terms of ecommerce. 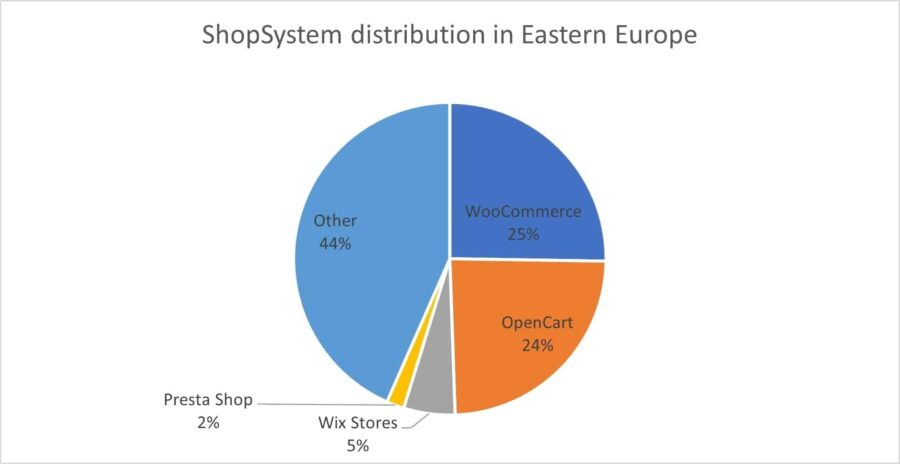 Unlike the rest of the regions, this one is also currently in conflict be that with one another, or itself, so the focus doesn’t currently lie on ecommerce at the moment.

Southeastern Europe is a region that is mostly new to the ecommerce world, with e-shoppers ranging from 69% and 59% in Croatia and Greece and the rest of the countries standing under 50% of the countries’ populations. That said however there has been a steady increase in the percentage of e-shoppers and e-retailers which has as a result led to an increase in both the number of active users and of shop systems used.

While countries like Croatia, Bulgaria and Greece have a more stable e-market, they are still prone to change. As for the rest of the countries, they are all pretty much fair game, as the number of e-shoppers is still not as high and as a result that could very easily change. In southeastern Europe WooCommerce is the primary platform used with it being the system of choice for at least 40% of the region’s ecommerce. That is not very likely to change, however there will be an increase in the number of active users for all shop systems.

All in all, the number of e-shoppers has increased in Europe since the start of 2020 and will continue to do so during the course of this year. The trends show that the increased amount of e-shopping has a direct effect in the number of online shops/ ecommerce websites being added to the market, as people are trying to take care of errands and cover most necessities while avoiding crowds. That resulted in the advancement of technology, while the funds have gotten tighter during the same course compared to 2020. That gives shop systems like Shopify, WooCommerce, PrestaShop, Wix Stores and Ecwid the edge over both premium priced ones and older/not so innovative shops for this year.