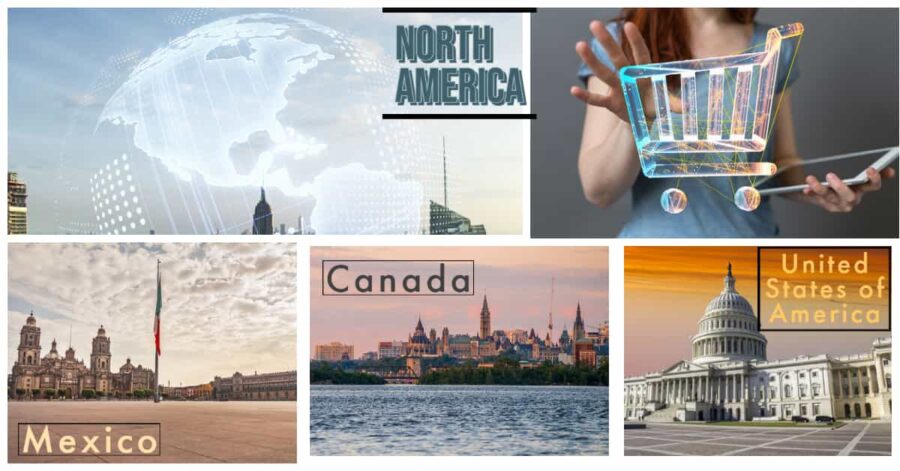 North America is home to some of the most developed countries in the world in terms of ecommerce. With that said however, since the start of 2020 the ecommerce world has seen some changes, which make 2022 a bit unpredictable. 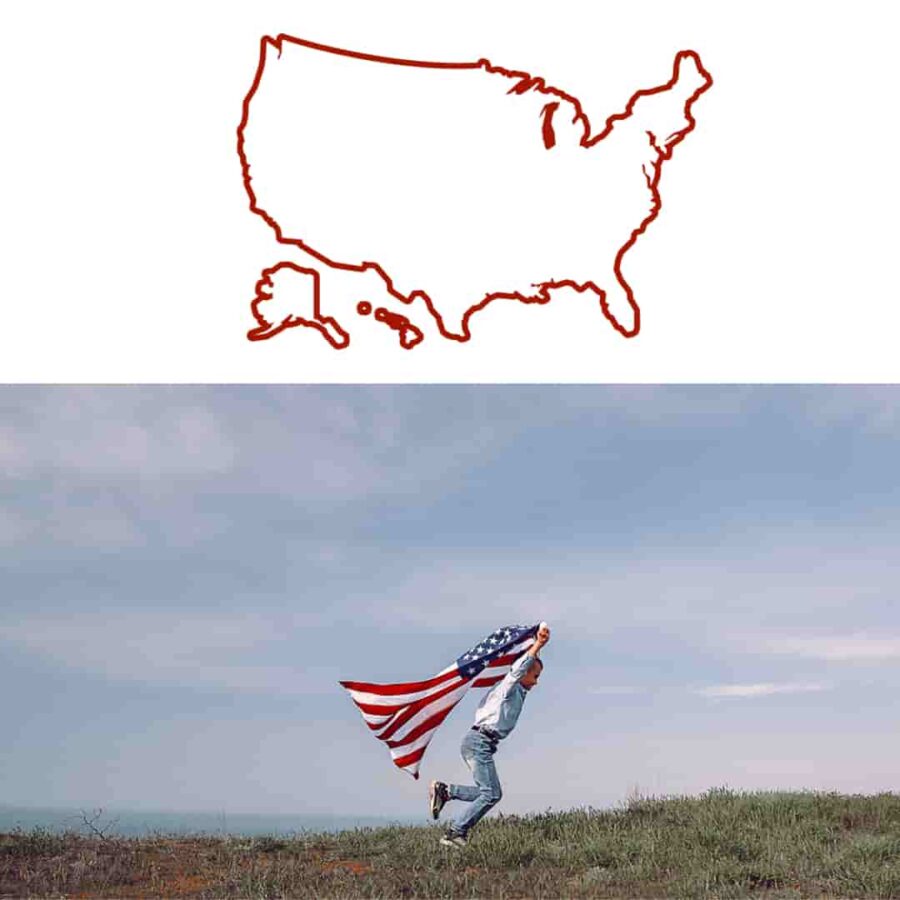 In 2021 the online sales in the USA made for 19,2% of the general amount of sales. While that’s less than half of the growth retailers experienced in a pandemic-fueled 2020(31,8%), it’s noteworthy that the industry maintained gains—and even grew (14,2%)—compared with the earlier giant surge in ecommerce. 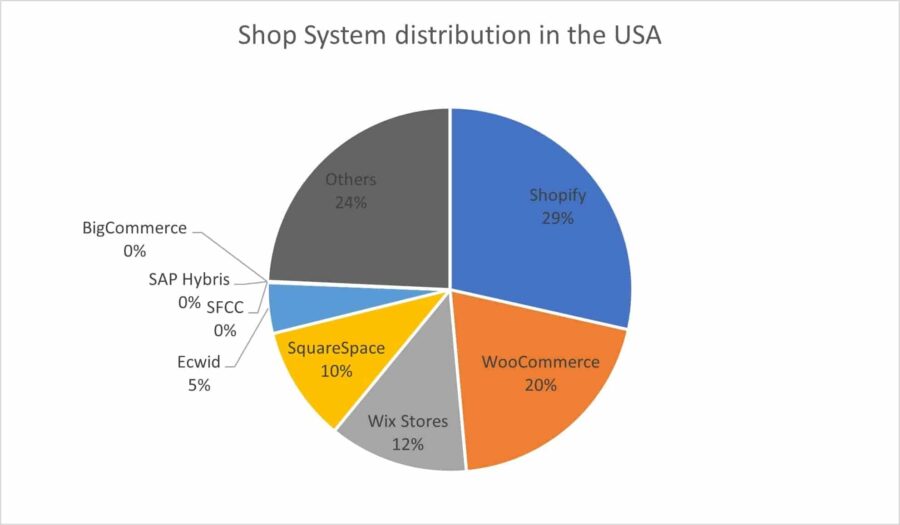 Similarly to Europe, before 2020, systems like Magento, Shopify and WooCommerce were at the top of the game. That has since then changed. While Shopify and WooCommerce continue to dominate the charts, Magento has lost a lot of active users, despite the large community it has. With the growth ecommerce has had in the last decade, new shop systems have been introduced to the market. In the USA systems like Wix Stores, Squarespace and Ecwid have gained a lot of active users due to the ease of use and prices they provide their customers.

Since the beginning of November 2021 Squarespace, Ecwid and Wix Stores have been advertising their systems in different platforms (especially on podcasts), which has led to an increase in the number of active users for them. These advertisements continue being shown today, which leads into thinking that this method is working.

These are however not the only shop systems in the market. There are shop systems like Salesforce and SAP Hybris which are known as enterprise level systems for both the money their customers pay and the revenue they generate with the help of such systems. Since the start of 2020, these systems have lost customers despite the increase ecommerce has had.

The newest version of a shop system is the headless one. As mentioned in the previous article, CommerceTools is one of the most popular ones in this category. BigCommerce is also quite popular in the USA.  Headless systems have gained a lot of popularity in the last year due to the seamless shopping experiences they create.

Combining all of this information leads while keeping in mind the patterns from the past years’ growth in ecommerce leads to the following prediction. Squarespace, Wix Stores and Ecwid will continue to grow the number of active users with the predicted increase of ecommerce traffic in the US. Well known and trusted players like Shopify and WooCommerce will also continue to grow in 2022 as the enterprise level players will most likely switch to them depending on their revenues. Shops like CommerceTools will also continue increasing their numbers in 2022. 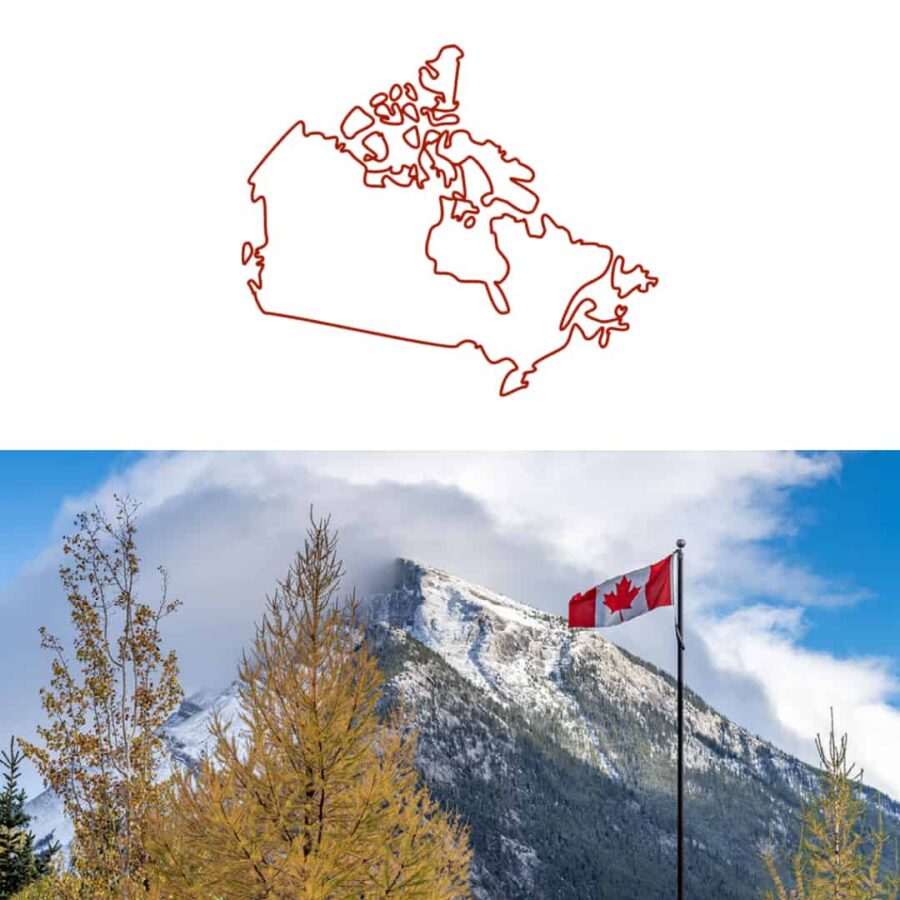 Canada has also had an increase in the amount of online shopping since the start of the pandemic. In 2021 there were over 27 million eCommerce users in Canada, accounting for 72.5% of the Canadian population. Increased online shoppers means that retail eCommerce sales in Canada continues to climb, both in real terms and as a proportion of total retail.

The Canadian e-market is also a consolidated one. However, when compared the two have differences in the amount of internet shoppers, with the USA having the lead. Similarly to the USA Shopify and WooCommerce operated websites dominate the e-market in numbers.

The above mentioned advertisements are also valid in Canada, which means that Squarespace, Wix Stores and Ecwid have also gained a lot of new active users in the last few months.

Enterprise level shop systems also operate in Canada due to the strong economy it has, however they are newer to the country compared to the USA. They have a significant number of active users, which has decreased since the start of 2020.

In Canada BigCommerce is one of the biggest headless ecommerce platforms. In the last year they have gained a lot of business, which is why we predict that they will continue growing in the course of 2022.

Due to the closeness with the USA because of the physical borders, a sizable proportion of the nation’s eCommerce spending goes to non-Canadian websites. While that number has decreased since 2020, many Canadians purchase on American websites.

Many sources predict an increase in the amount of websites until 2025 with 2022 being one of the more significant years for it. As a result of that, we predict that while Shopify and WooCommerce will remain in the lead and gain a lot of new active users, Squarespace will not be too far behind. Wix Stores and Ecwid will also gain new users in 2022 because of the increase of online shopping websites. The numbers in enterprise level systems however will remain mostly similar to 2021. 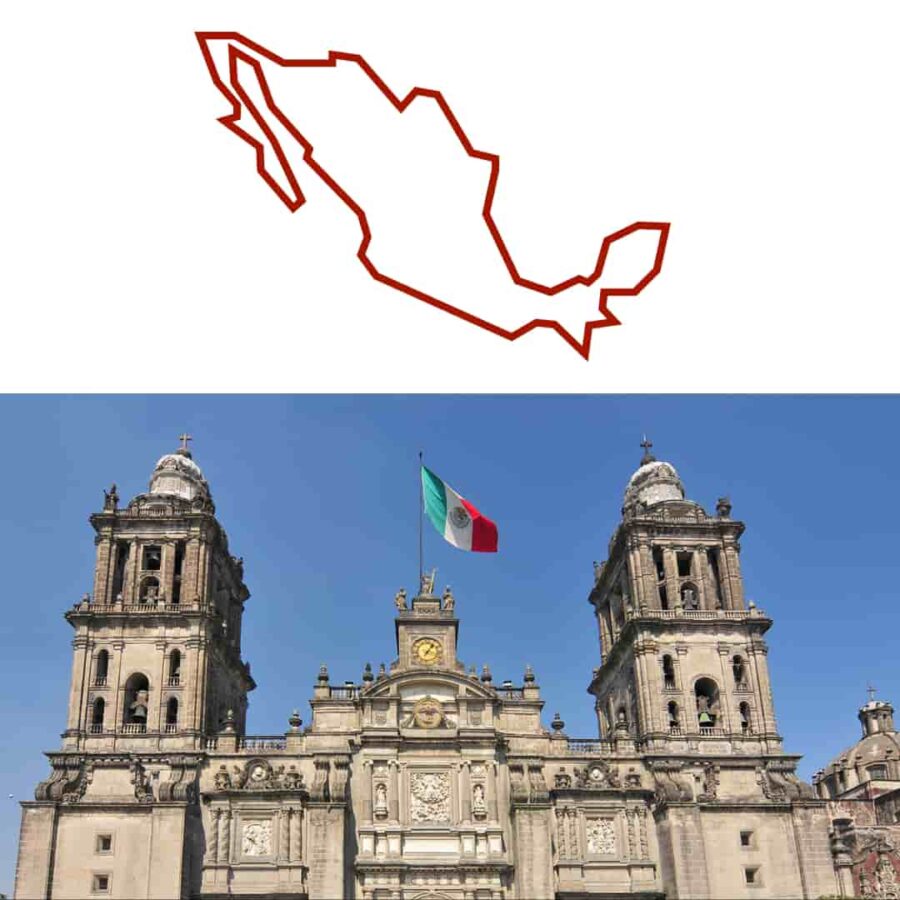 Mexico was the 16th largest market for ecommerce in 2021. The Mexican eCommerce market had a growth of 18% last year and revenues for it continue to increase. New markets are emerging, and existing markets also have the potential for further development. Market expansion in Mexico is expected to continue over the next few years, as indicated by the Statista Digital Market Outlook. 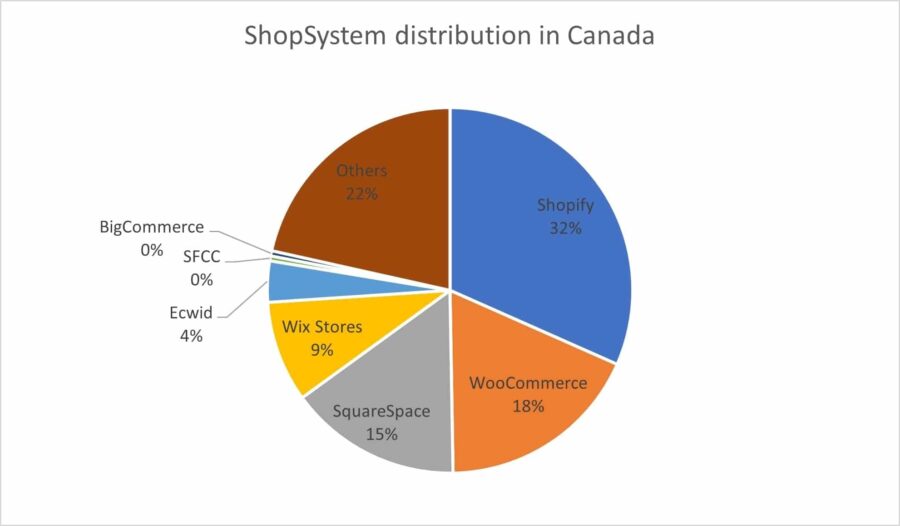 While the market in Mexico is also consolidated, compared to the other two, it still has room to grow. As per the norm WooCommerce and Shopify dominate the Mexican ecommerce technology world. Due to the room to grow however, shop systems like PrestaShop play a more significant role in the area. Despite being in the North American continent, Mexico is a Spanish speaking country. Meaning that besides the more commonly known shop systems, they also use Latin American shop systems like MercadoShops. It is similar to the other ones, but more cost efficient.

Enterprise level systems also operate in Mexico. Their presence however is not as significant as it is in the USA or Canada.

Similarly to Canada, many people also purchase in US websites, due to the similar trade taxes and physical closeness.

According to AMI analysis, the e-commerce market in Mexico will grow by 27% between 2020 and 2025. Which is why we predict that all the shop systems will increase in the number of active users in 2022. PrestaShop and MercadoShops will gain a lot of new active users and might lose a few businesses that have grown too much in 2021 for their system to properly support. These businesses will likely move to WooCommerce, Shopify and Wix Stores. While enterprise level systems are predicted to remain stagnant.

Just like the rest of the world, the pandemic has also had an effect in the north American continent. The number of shoppers has increased and will most likely continue to do so in this year. The trends show that the increased amount of e-shopping has a direct effect in the number of online shops/ ecommerce websites being added to the market. That gives shop systems like Shopify, WooCommerce, PrestaShop, Wix Stores and Ecwid the edge over both premium priced ones and older/not so innovative shops for this year. Due to the physical closeness and the similar trade taxes, Canadians and Mexicans also purchase products from the USA. The number has since 2020 decreased, but the trend will most likely continue to remain present.